The Cussler Museum: The Back Room

Home/Hooniverse Goes To..., Museum Tour/The Cussler Museum: The Back Room
Previous Next

The Cussler Museum: The Back Room

Who Says Carroll's Was The First Cobra?

This olelongrooffan missed Modern Art Monday (hell yeah, he’s still around!) so I thought I would post some images of the “Back Room” captured during my visit to the Cussler Auto Museum while out in Ms. Martin’s hometown this past summer. I blogged about the 50’s excess in the “Front Room” and even was able to squeeze in a Modern Art Monday post here but if my fellow Hoons want to see the “Back Room” you’ll have to make the jump. 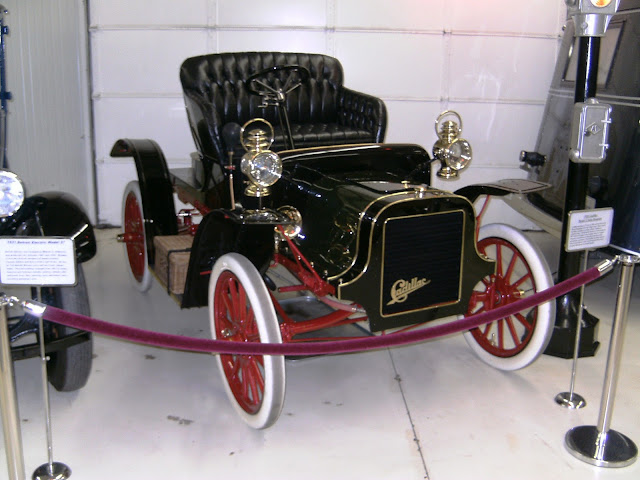 This, my fellow Hoons, is what a Cadillac looked like back in the day. Brass head lamps, bright red suspension and wheels plus white tires. What more could you ask for? 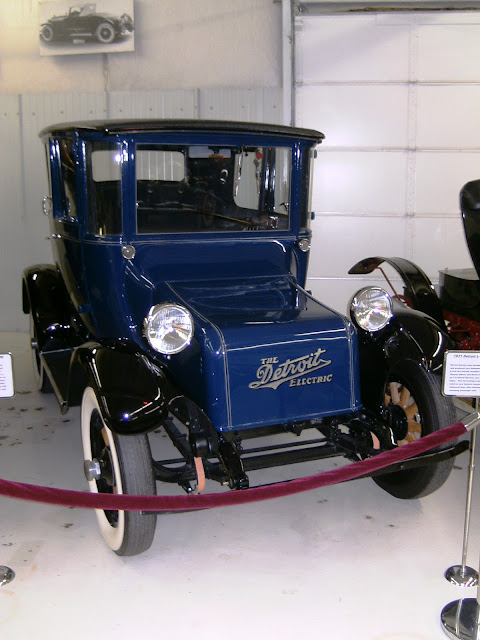 This 1931 Detroit Electric wasn’t the first electric car, nor the last, but it was the favored marquee of Thomas Edison in addition to Henry Ford’s wife Clara. 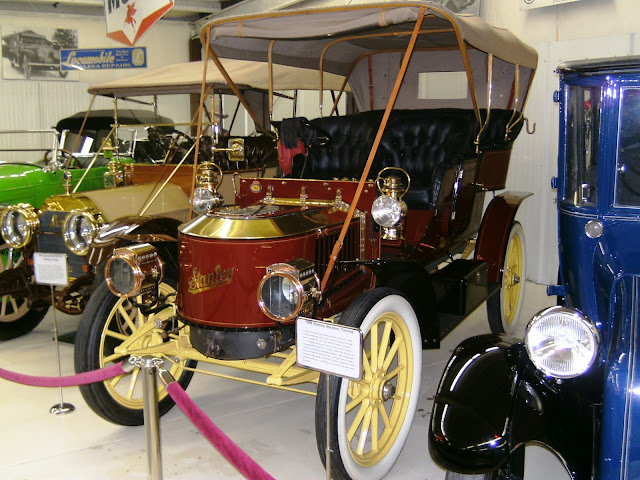 The Detroit Electric was produced during the years 1907-1939. Prior to that, steam was the mostly preferred means of “alternate” fuels as is demonstrated by this 1906 Stanley Steamer. I just love the bright red paint coupled with yellow painted suspension and wooden wheels. 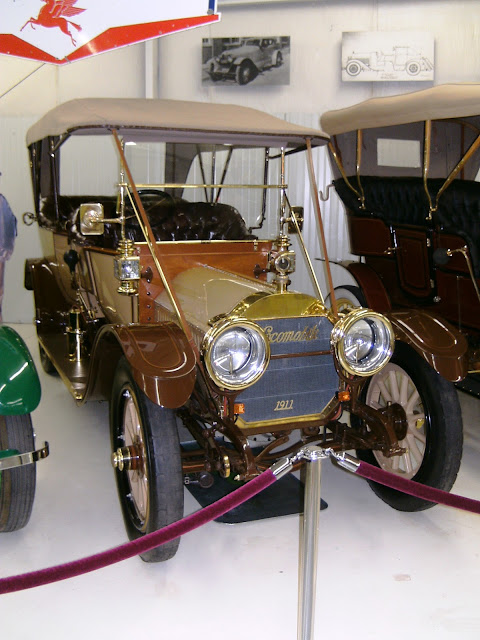 This Locomobile M-48 is capable of carrying seven passengers in comfort. And we thought malaise era horsepower was lacking? This beauty has a 525 cubic inch six cylinder under the hood capable of producing a whopping 50 horsepower! In 1911, this car cost $4,800 while a top of the line Cadillac was a mere $1,800. I’m not really sure what that is worth in today’s dollar but I am sure the comments section will reveal this obscure fact in about..counting….now. 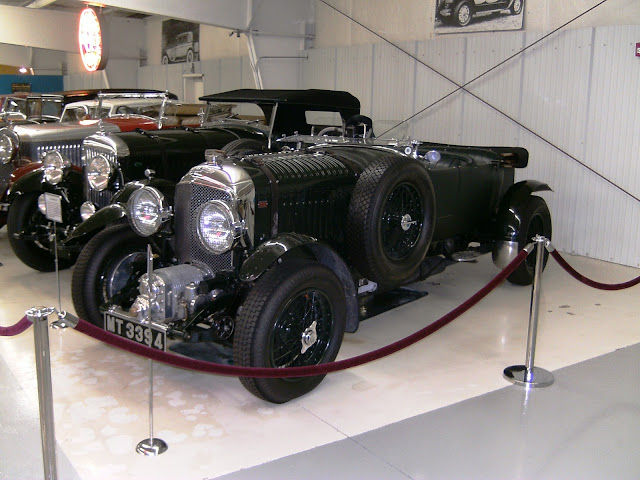 In addition to a several hundred tons of cool old iron, Clive also has a Blower Bentley on display. This one was one of only fifty super charged Bentley’s and according to the placard in front of it, it appears to have a vintage racing pedigree at the Lyons International Vintage Race in France, having won that race twice. However, this olelongrooffan was unsuccessful with neither google nor bing in procurring any results about the Lyons race. Incidentally, the author of one of the blogs I follow, also a resident of the Mile High City, has written a novel or two about these Blower Bentleys. (disclaimer: I do not personally know the author, I merely enjoy his blog exploits) 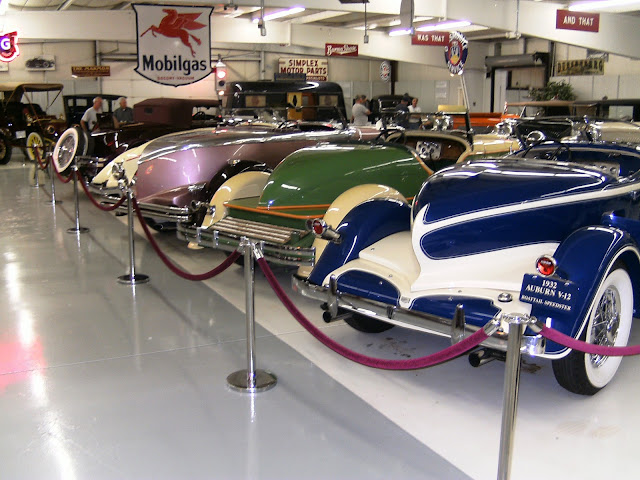 Having said that, is this not the best grouping of rear ends my fellow Hoons have seen in awhile? I love boattail roadsters with a passion. 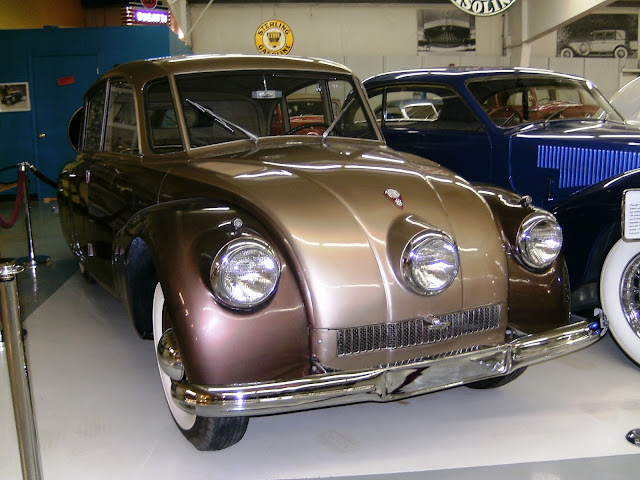 Hell, Clive even has a Tatra in his collection. I remember attending the Amelia Island Concours several years ago with my nephew, the Kid, and this olelongrooffan spotted and identified one of these from across the 17th fairway. 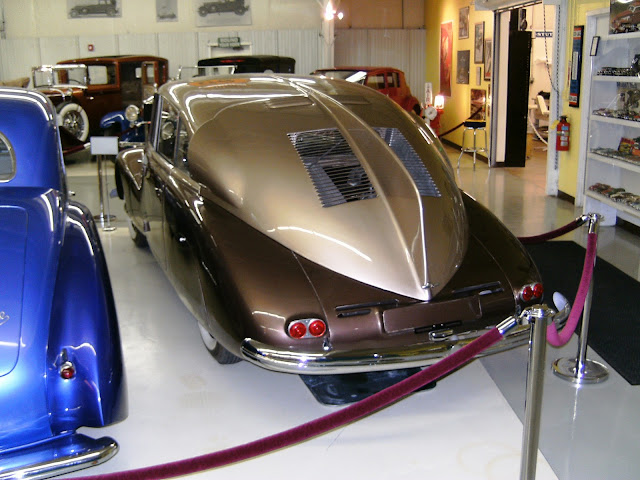 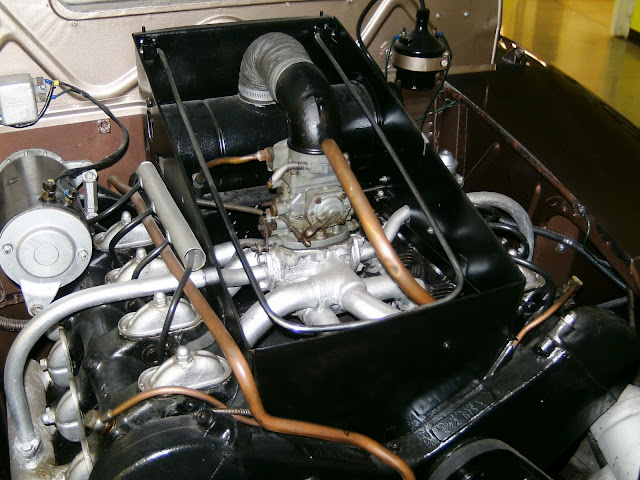 A little later I was admiring the pink beast in the following image, one of the curators came out of the restoration area and I inquired of him to pop the rear hood on that Tatra so I could grab an image of that air cooled motor for my fellow Hoons. 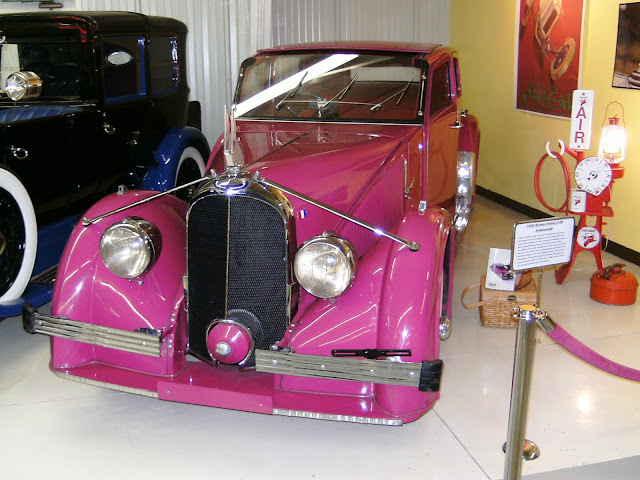 This 1936 Avions Voison C-28 Ambassade was built by the company that pioneered the use of aluminum (that would be aluminium to you Rust My Enemy) on the exterior skin of automobiles. This is a pretty unique automotive design that only the French could achieve. And that color! Several more images of it on my flickr page via the link provided below. 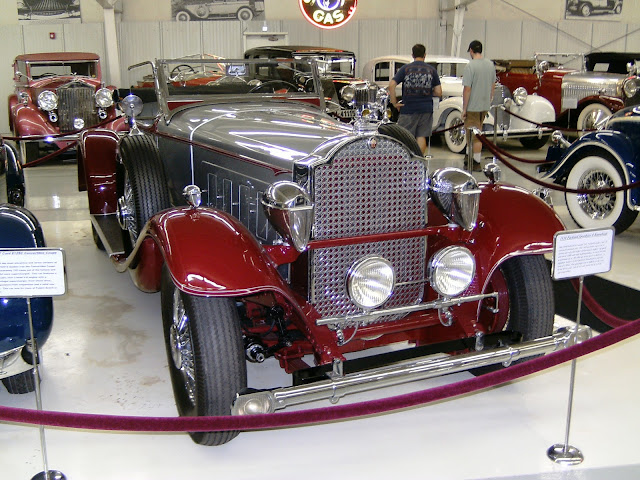 I had to include an image of this 1930 Packard Speedster with its super cool upper  headlamps and matching fender mounted turn indicators. 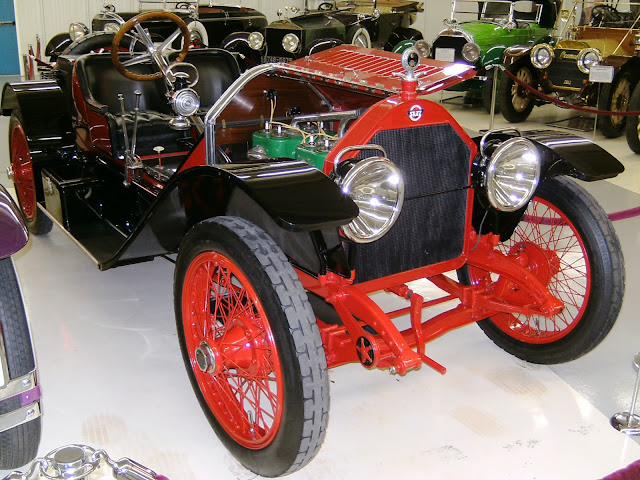 And what respectable blogpost about high end, fanatically fantastically restored classics would be worth its salt without an image of a 1913 Stutz Bearcat? 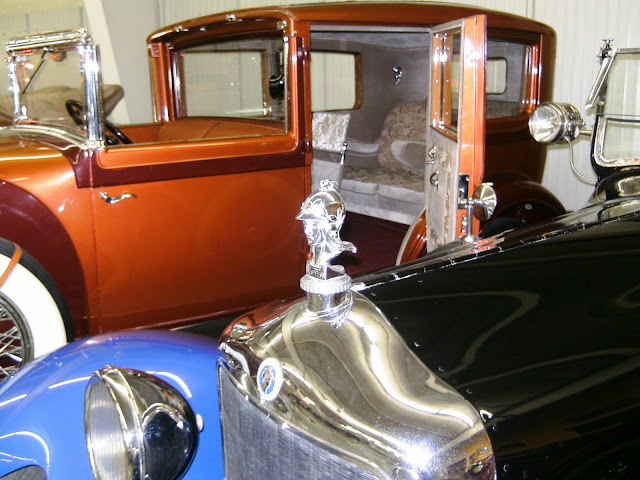 Last week when a Hooniverse Asks question concerned car seats, this olelongrooffan tried everything I could imagine to enlarge this image to get the rear sofa seat of that Cadillac submitted. The upholstery on that seat, as well as the overall cushiness appearance of it, reminded me of my grandmother’s sofa back in the 60’s, on which we youngsters were not allowed. 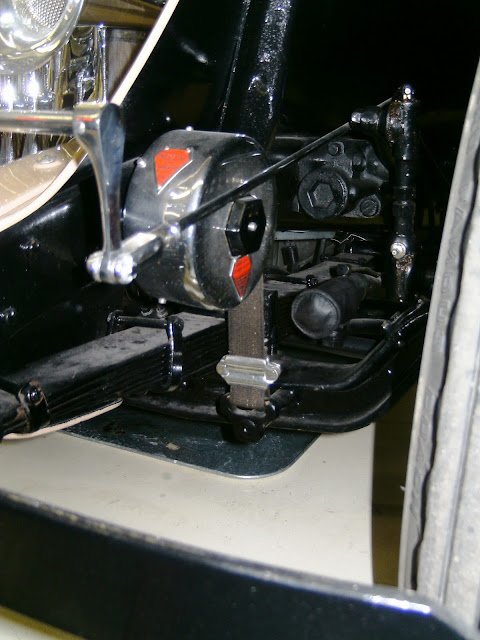 Although it is hard to make out at this scale, this is an image of a Duesenberg front end. That canvas strap holds the leaf spring from over correcting and becoming sprung. That red plaque on it instructs mechanics to “NEVER use grease or oil” to lubricate it. Honest to God. What engineering back in the day. 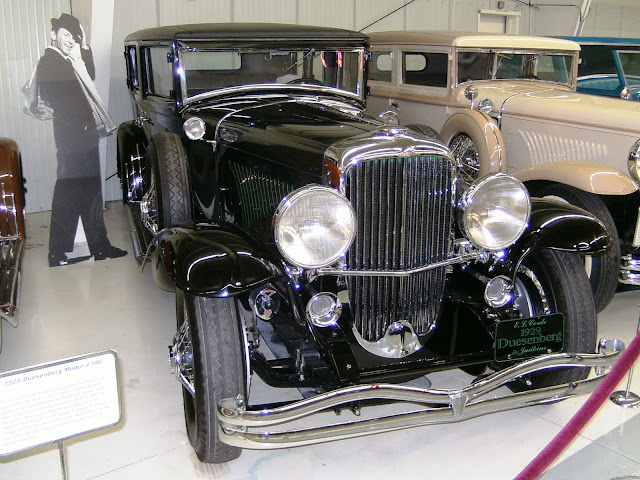 It was a part of the suspension system of this 1929 Duesenberg Model J. According to the placard in front of it, this is a moderately famous, well if you are of an age, movie car that appeared with Frank Sinatra, Dean Martin, Sammy Davis, Jr. and Bing Crosby in Robin and the Seven Hoods as well as with Marilyn Monroe, Tony Curtis and Jack Lemmon in Some Like It Hot. 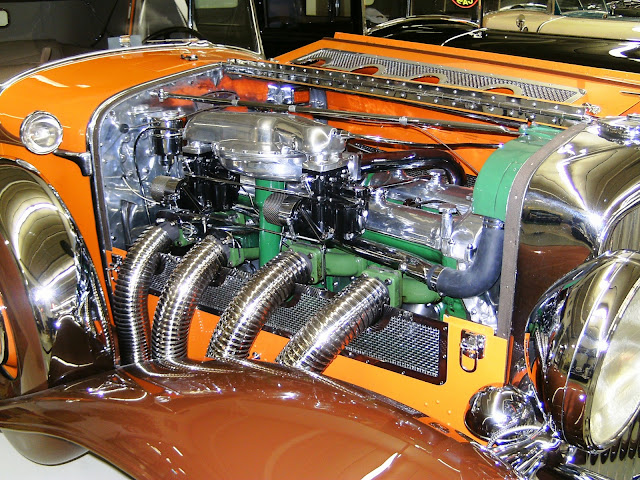 Situated adjacent to that Model J was another “Duesey” and if I remember correctly, this was equipped with a supercharged flat head 8. 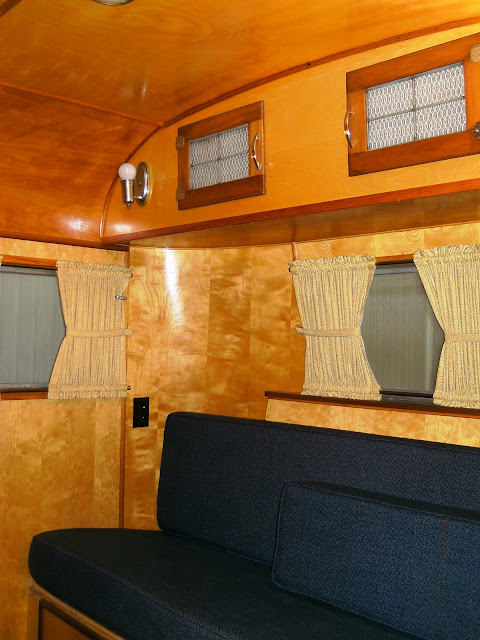 Well my fellow Hoons, by this time this olelongrooffan had spent about three hours checking out Clive’s magnificent collection and I just wanted to stretch out my weary bones on this sofa as shown in the above image. 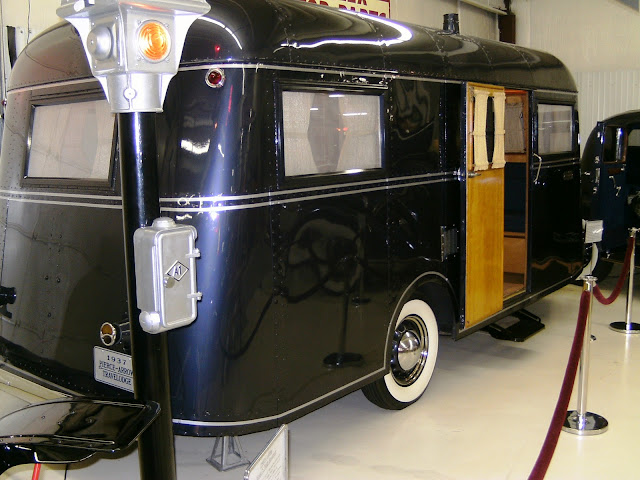 Unfortunately, as it was located in the front end of this rare 1937 Pierce-Arrow Travelodge 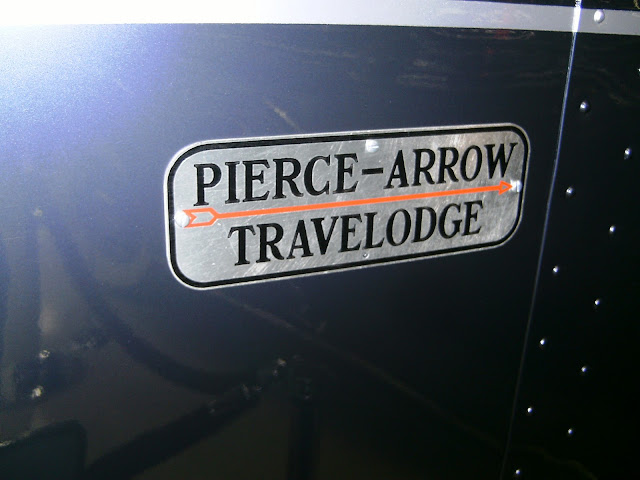 About the Author: LongRoofian